Here is the list of Top 10 most entertaining and loved Kakegurui Characters , Share your Opinion Down below in comments

The 10 Most Entertaining Kakegurui characters

There are many of popular and entertaining characters in a series as wild as Kakegurui.
Although the show isn’t known for its storytelling, the majority of its actors can be entertaining to watch.
Each character has a distinct personality, with several of them having diverse motivations that change as the story develops.

Kakegurui is a popular Netflix anime with multiple mangas.
This article will focus on Kakegurui – Compulsive Gambler and will not include Kakegurui Twin or other related spin-offs.

Yumeko eventually befriends various adversaries, including Itsuki. When she first appears, viewers picture her as the daughter of a wealthy toy company head. She advertises the company with a set of cards, which she can conveniently also use to cheat with, based on a hidden design element that Yumeko would point out to the audience.

She was expelled out of the Student Council after her loss, and she was unable to obtain Yumeko’s fingernails as she intended. In a bet on Yumeko’s behalf against Kaede, she would later cruelly remove her own fingernails. Yumeko’s risk would eventually cost her her livelihood, but she came out on top.

Yumeko’s triumph effectively placed Kaede’s life plan in her hands, despite the fact that she had a crush on him the entire time.

Kaede is revealed to be cold and calculated when he initially appears. He’s one of the few important male characters in Kakegurui, albeit he’s still a minor figure in comparison to Mary or Kirari. Nonetheless, he is extremely ambitious and desires to become President of the Student Council.
Unfortunately for him, he loses a major bet to Yumeko, ultimately handing over his life to Itsuki. His hair grows white, but that doesn’t stop him from remaining as rational as ever. He would subsequently play a crucial role in the Greater Good Game, wagering with Yumeko, Itsuki, Miroslava, and Ibara.During the game, he demonstrated his brilliance by deducing that Miroslava and Itsuki were plotting against the rest of the team. He was last significant after Itsuki lost a side-bet, which left him conflicted because she wanted him to win in any case.

Yumemi is a pop idol with a devoted following that will go to any length for her. They didn’t care that she disliked them and merely wanted to become an idol in order to launch her career as a famous Hollywood actress.
To her credit, she can recognise each and every one of her fans. Yumeko and she have a brief reunion in Kakegurui xx, where the two of them fight Sumika Warakubami, Yumemi’s role model. Yumemi still aspires to be a Hollywood celebrity, despite the fact that she is clearly not on the same level as Sumika. Yumeko and Yumemi eventually defeated Sumika. Yumemi may have appeared to be a two-faced idol at first, but her risk with Sumika humbled her.

Midari’s presence in Kakegurui is difficult to forget, for better or worse. She’s a complete degenerate who fantasises about committing suicide.
She does, however, share certain similarities with Yumeko in that when it comes to gambling, money is unimportant to them. Midari develops feelings for Yumeko when she loses to her. Yumeko, unfortunately for Midari, has no desire to recognise her due to Midari’s proclivity for rigging games in order to lose (thus eliminating the risk Yumeko loves).
Yumeko makes a point of ignoring Midari in multiple scenes, which gives her character some much-needed light-hearted depth. She’s also the central character in the manga Kakegurui Midari, which explores her darker side. Fans love her, and there are some wonderful sequences in the manga that give her character more dimension.

Ririka’s mask helps her stand out as a different character in Kakegurui, despite the fact that she appears remarkably identical to her twin sister. She’s a calm and demure heroine who is beloved by many series fans for her connection with Mary. That bond was important in transforming a formerly overly reliant character into a self-assured woman. Because of a ridiculous dice game, she was destined to become a mere shadow of her sister, which was bad for her. They get along well as brothers, and their nearly identical appearances make it easy for one to pass for the other. Ririka’s character development has made her appear more humanitarian than her sister.

Yumeko’s first friend at Hyakkaou Private Academy was Ryota. In Kakegurui, his straightforward straight guy routine may be very refreshing in a cast full of devious and colourful characters. He began following her around after she paid off his debt, often attempting to caution her against taking a risky move.
Yumeko, of course, disregards his advice at all times. Despite this, he sincerely likes her and is willing to take a chance with Mary against Miyo and Miri Inbami (with Yumeko’s life on the line). In this game, he trusts Mary with everything, and the Inbami sisters lose.

Unsurprisingly, the Student Council President is one of Kakegurui’s finest gamblers. She appears to be a villain at the beginning of the series, but her good side emerges as the story goes. Her lovely bond with her twin sister, Ririka, and her amorous aspirations with Sayaka are two examples of this.
Aside from that, she invented the housepet system and is obsessed with the idea that the school is like a fish tank, with the bigger fish eating the younger ones. Midari stabbed her own eye with a pen and she didn’t even react, let alone worry about any kid who lived on one of her life plans. Kirari, like Yumeko, is obsessed with gambling.

In a family of con artists, an honest man is quite the anomaly. Ibara, on the other hand, is incapable of lying. He may appear to be a traditional punk, but he is a genuine kind guy who must maintain a mask for the sake of his family. Rin, thankfully, is more than capable of lying for him. Rin, of course, had been using him the entire time.
Ibara is still willing to be a bro and stands up for Rin when he is pushed to the bottom and out of the election. He’s the most likeable of The Hundred Devouring Families, and he also comes across as likeable when compared to Kakegurui’s core cast.

Kakegurui’s main protagonist is surely a fascinating figure. She appears innocent, but owing to her gambling degeneracy, she ends up corrupting everyone she gambles with. She thrives on the thrill of a bet and is unconcerned about the stakes or anything else in these games. It makes no difference what the risk is.
In fact, if the game was rigged so that there was no risk, she would become upset, as evidenced by how she treated Midari after their first game together. She’s very perceptive and can spot deception in others. Not only so, but she frequently relies on chance to get through, despite the fact that this combination of characteristics would place her at a disadvantage.Yumeko is a wild card, therefore Kakegurui fans will often be entertained, even if her victory against most other characters is predicted.When the cast isn’t gambling, she has some amusing encounters with the other characters. 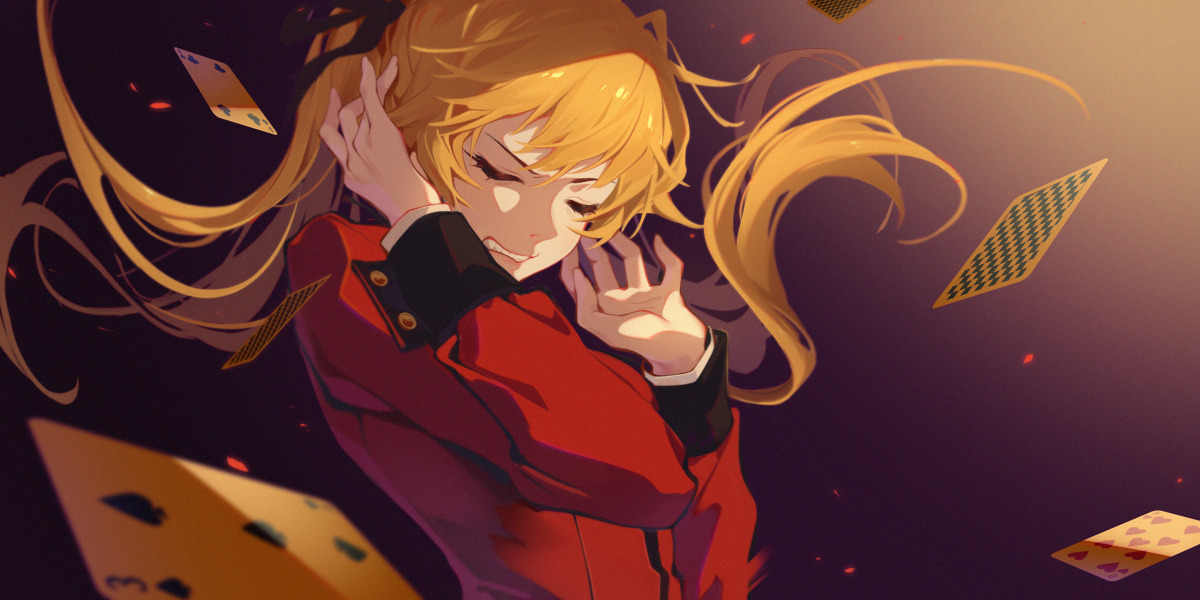 The majority of the academy’s pupils are from wealthy families, but Mary is just an ordinary girl who received a scholarship. She isn’t a member of the Student Council or The Hundred Devouring Families, but she is one of Kakegurui’s finest gamblers. She may have some typical Tsundere characteristics, but she’s still a delightful character to watch. Mary appears in Kakegurui as an antagonist, loses to Yumeko, and subsequently becomes a deuteragonist. It’s been quite the journey for her, from bully to house pet to ally, not to mention the fact that she’s the main protagonist of Kakegurui Twin.It’s also touching to see her accept Ririka as a Kakegurui ally, let alone her relationship with the rest of the cast.

Top 10 Strongest Anime characters who can destroy the universe

4 characters Bakugo can and can’t Beat :My Hero Academia

My Hero Academia: Can Bakugo have One For All?

Top 10 Strongest Anime characters who can destroy the universe

4 characters Bakugo can and can’t Beat :My Hero Academia